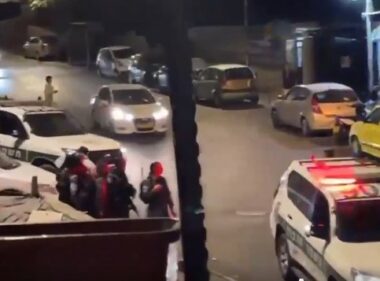 On Saturday night, Israeli troopers invaded the at-Tour and Silwan cities in occupied Jerusalem, resulting in protests earlier than the military fired many fuel bombs and concussion grenades.

Media sources stated a number of military jeeps invaded the at-Tour city, resulting in protests earlier than the troopers fired man fuel bombs and concussion grenades on the Palestinians and surrounding properties.

They added that the troopers sprayed many properties and streets with wastewater to pressure the Palestinians to go away.

It’s price mentioning that the military has continuously been invading the city, particularly after the troopers shot and killed Mohammad Osama Abu Jom’a, 23, on September 22nd, in Modi’in Illit unlawful colony constructed on stolen Palestinian lands west of Ramallah, within the central a part of the occupied West Financial institution.

The troopers additionally invaded Silwan city and closed a number of streets earlier than firing fuel bombs and concussion grenades.

The troopers put in roadblocks, stopped and searched vehicles, and interrogated a number of Palestinians whereas inspecting their ID playing cards.